The Right Fly (and Why)

Everything You Need to Know About Flies. And Maybe a Little More.

Sometimes, choosing the right fly (and by “right,” we mean the one that’s going to draw a big, beautiful rainbow from the depths of water and onto your line) is simple. And sometimes, it requires a delicate balancing act of art, science, and good ole-fashioned observation. But either way, it’s not nearly as complicated as you might think. Here’s how to decide which fly is most likely to put a fish in your net.

The first step is to know and understand the different categories of flies. A dry fly is fished on the surface of the water and generally represents an aquatic insect that has recently hatched from its larval stage. A wet fly can mimic a swimming insect or small minnow and is fished below the surface – near the top or bottom of the water column. Streamers are similar to wet flies, and are fished below the surface; they generally imitate larger baitfish; crustaceans or leeches. A nymph is an aquatic insect in its larval stage and is usually fished toward the bottom, around the rocks and other structures that comprise its natural habitat. An emerger is the stage in which an aquatic insect has risen to the surface of the water and is hatching into an adult. Finally, a terrestrial is a non-waterborne insect or bug, such as a grasshopper, that has blown or fallen into the water.

Before deciding which fly to put on your line, first take a few minutes to observe the water. 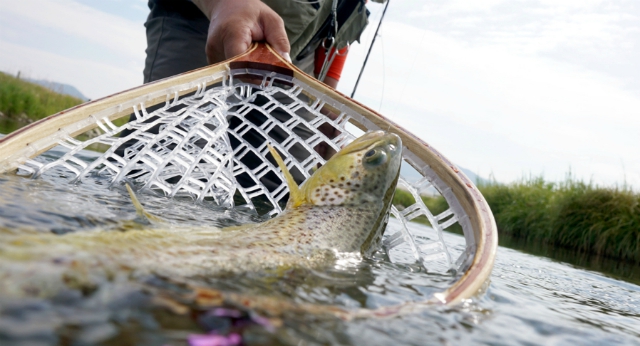 What fish-friendly forage can you find? Do you see bugs? Minnows? Are there grasshoppers floating downriver? If these food-sources are present, then the fish you’re targeting will be familiar with them, and familiarity is the first step in filling your creel. This process is known as “match the hatch,” which is really just a clever way of saying that it’s usually best to use a fly that represents a food source the fish know at the proper stage of development in its life cycle.

Think of it this way: Even if you don’t know what a specific food is, you probably have a sense of whether or not it will be good to eat. And fish are no different.

Finally, don’t stress and simply fish like you mean it. Often, confidence and close attention to your technique and your surroundings are better “bait” than the perfect fly. It’s often said that you can fish the wrong fly pattern the right way and catch more fish than someone fishing the right pattern the wrong way, and it’s true.

An effective way to catch sunfish in summer is to use a slip bobber. A slip because it allows you to cast and fish deep water, get information

How to Put in Ponds to Attract Whitetail Deer