Minnesota autumn muskie fishing can be best of year

It’s something you may want to consider, too.

That’s because October and November are regarded as the best months for catching a Minnesota state record or 50-inch or longer muskie. Yes, when most anglers are winterizing their boats muskies are actively feeding in advance of winter, and they are often the heaviest they have been have all year.

In 2015, for example, in less than a month anglers at Mille Lacs Lake caught two incredible fish. On Thanksgiving eve, a 30-inch girth muskie estimated at 61 pounds was caught by Dominic Hoyos of Stillwater, Minn. The catch surpassed a 57-inch Lacs muskie caught just 16 days earlier on the same lake on a flyrod.

Late season muskie fishing is no picnic. Freezing temperatures. Cold hands. Ugly whitecaps. Iced-up rods and reels. All of these and more are in store for those who long for this autumn’s full moons of October 25 and November 22, the latter Thanksgiving Day.

If you do try late season muskie fishing before it closes Dec. 2, a few things to consider:

Learn more about where you can go Fishing in Minnesota. Before planning your next fishing trip to go catch muskie get your MN fishing license. 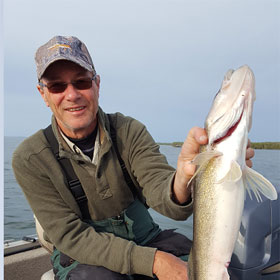 C.B. Bylander is a long-time Minnesota angler who has extensive fishing experience throughout the state. He is a former outdoor magazine field editor, daily newspaper outdoor editor and Department of Natural Resources fisheries communication specialist.

4 Tips if You are Thinking about Brown Trout Ice Fishing

What You Need To Know About Red Tide in Florida

Seven Ways to Save Wild Turkeys