The Best Day to Catch a Trophy Bass

Bass are fat and egg-laden in the prespawn, making it prime trophy-hunting season. As for the best prespawn day to go for a big one, our opinions probably differ. Most folks would target the day that a front passes, or during a long spring warming trend. Me? I’ve caught many of my truly largest bass in “dreaded” post-frontal conditions.

Fishing on a daily basis, first as a guide on Lake Fork and now as a pro, I’ve been able to watch the bass bite ebb and flow each spring. Fronts roll through about every five to seven days. It becomes a fairly predictable cycle of fishing getting good, then the weather changing and things slowing down. Over and over it goes, until a prolonged warming trend kicks off the spawn.

Warm and stable weather usually results in consistently good fishing. The pattern stays the same for a few days, and once you figure it out, you can catch fish reliably. The day a cold front arrives is the favorite day of most anglers. The front really turns on the bass, and this is the day to catch big numbers and some good fish too.

In my experience, the crashing water temps seem to urge the biggest bass to feed. Although fish are less aggressive, they’re often grouped up in the thickest available cover or the closest deeper water near any hot spots that you found during the front. For example, if bass were roaming a shallow flat before the front, check nearby matted grass, brush piles, points or creek channels after the front.

Once I get a bite on a post-frontal day, I assume there is a school in the area. Even though it’s typically shallow fishing, I think of it more like offshore ledge fishing. Time to drop the anchor and go to work. Bass on Lake Fork often drop back to creek-channel bends. While they might have been all across a 200-yard-long flat before the front, they will hang around a couple specific stumps on a bend afterward. Many times, I’d have guide customers cast jigs to the same stumps for 30 to 45 minutes. The fishing is painstakingly slow, but when one bites, you better get the net.

So the moral of the story is to go out and catch a bunch of fish when the front passes. But for a fish of a lifetime, or your biggest five-bass limit ever, meticulously work key spots the day after the front.

What about my least favorite days? Everyone’s aware that the second day after a front just stinks. Two cold nights, bluebird skies and no wind take their toll. We all hate that day. But the fair-weather fishermen return as soon as the temps rise again. Those first couple warm days feel good to us anglers, but I find the fishing just fair. They are what I call “table setters.” That is, they set things up for good fishing once the next front starts to approach, and the whole process begins again.

All your golfing buddies call in sick on the nice days, surely causing their bosses to raise their eyebrows. If you play hooky on the nasty post-frontal days, you might catch a lunker … plus your boss won’t suspect a thing.

To learn more about fishing tackle and techniques firsthand from expert FLW anglers, check out the #ReelFun fishing events taking place at Walmart stores across the U.S. June 2-4, 2017. Find dates and times at Takemefishing.org.

This article was originally posted at FLWFishing.com. 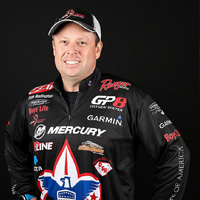 Tom Redington of Royse City, Texas, has fished as a professional on the FLW Tour for the past nine seasons. He currently holds three career top-10 finishes and one victory in FLW competition. In addition to competing on Tour, Redington is an outdoor TV host and guides on Lake Fork in Texas.