There are some good looking lures out there. Not only can they catch fish but some certainly possess aesthetic value. Sometimes it’s the sheer realistic look of the lure that is incredible. Other times, it is a small attention to detail or a unique appearance of something that didn’t come off an assembly line. “Beauty is in the eye of the beholder.” What may be just a loaded tackle box to you, may be a collection of art to be treasured by others. 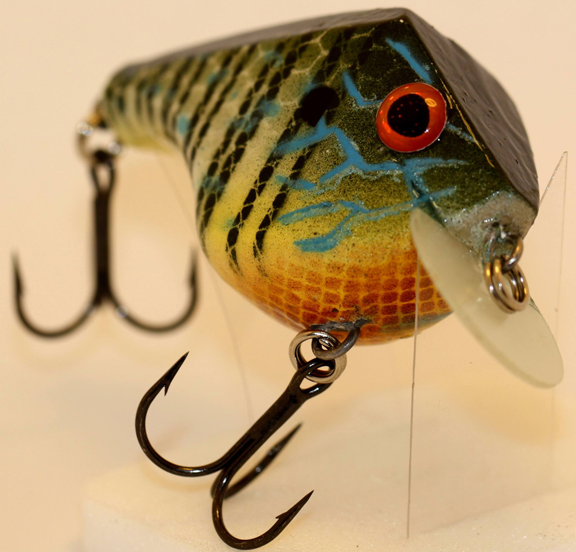 Aaron McAlexander, former “Master Caster,” hand paints crank baits that I would rather have decorating my desk than casting into a brush pile where it could get scratched or worse, lost to lurking limbs. Jeff Stokes has created his line of Big Sky Glassworks lures which includes spinners and jigs that are made out of glass instead of lead. “My passion for fishing has always existed alongside my lifelong passion for art, but the two were not necessarily connected,” Jeff Stokes explains on his web site. “But, when my creative pursuits led me to learn glass lampwork, I immediately saw how the medium could be used for fishing lures.”

I’ll be testing his ice jig sculpture very soon, but partially because I think the risk of losing it to a snag while ice fishing is low

I have trouble risking some of the meticulous creations of fly tiers too. Flies are composed on tiny hooks and of materials such as deer hair and feathers of various colors, floating capabilities, and behaviors in swift current. These life-like imitations crafted by skilled hands (not mine!) can disappear into the void with one untimely close encounter of a birch limb.

But what if YOU are the artist?

Andy Sutthoff, fly tier, fly casting instructor, and creator of #castingchat on Twitter, thinks he fishes better with his own creations.

”Fishing with my own flies makes me take chances and put flies in snaggy, but fishy areas.” He is confident enough with his fly tying ability that if he loses a fly, he knows he can tie more that evening. But he added that “losing a $3 fly from a fly shop hurts.”

With each casting event the angler takes a leap of faith, and purposely separates himself (hopefully temporarily) from an important, valued family member of his life-long tackle collection. There are situations, especially with new water, where I’ll only cast what I don’t mind losing.

But, “A ship is safe in harbor, but that’s not what ships are for.” (William G.T. Shedd)

And that “art” just might be the ticket to a big one.