Two hours North of Pittsburgh, the state of Pennsylvania has its toe in the Great Lake known as Erie. And within this relatively small access, a great steelhead fishery is managed.

Fall marks the time these chrome versions of rainbow trout leave the massive lake and enter the streams to spawn. This year, low water levels and warm temperatures delayed the runs somewhat. A recent storm just “blew out” the streams so when the water clears, anglers now may find many fish.

The steelhead fishery is no secret. Stream banks can become rather crowded, especially when the weather is nice. Some anglers even refuse to fish on weekends due to the intense fishing pressure in these locations.

Methods to catch these large, powerful fish vary greatly, but my preferred early season method helps gain a little more elbow room. Before sunrise on the rare days the wind cooperates, I like to ease out in the lake near the mouths of these tributaries in neoprene chest waders.

My son is now tall enough for waders and recently tried this method for the first time. We start casting spoons that glow in the dark, then work our way through different colors and types with various depths of wobbling as the sun eventually breaks over the trees and provides some much needed warmth for our fingers. Fan cast as far as you can into the lake, then vary the retrieve until you find something the steelhead like. 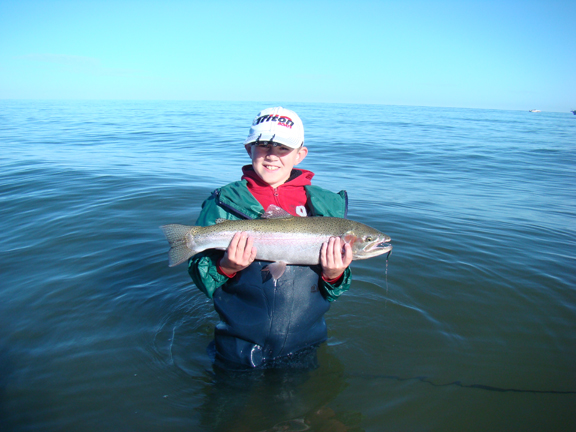 Try using spinning reels filled with light line, generally around 6-pound test. Until freezing, I prefer the new “superlines” such as Fireline or Stealth Braid which cast further and may have the thickness of 6-pound monofilament, but the strength of 10-12 pound line. Most anglers prefer a 10-12 foot “noodle” rod, which is similar in flexibility to a fly rod to help absorb the shock of the leaps and brutish runs.

Steelhead will be coursing through these streams all winter, returning back to the lakes in about April. As the thermometer drops and non ice-covered water gets tougher to find, my techniques will change. I’ll share about that later. But for now, I watch the weather and various fishing reports and try to be ready for a 3:30 a.m. drive where I might once again wade in to the lake and chuck steel for “steelies.”

A kayak, connecting the shore and your honey hole

Researchers Explain Why Fish Rained From Sky in Texas