How to Keep a Fish in the Catch and Release World

A few months ago I hooked a striped bass. The fish was clearly a migrating fish, and I knew that because of its color. There were pronounced black lines, vibrant colors of green and purple, and it was covered in sea lice. Resident fish adopt nature’s camouflage and turn a paler brown and white, and because I caught this fish on the flats and it still had those distinctive colors I knew it was passing through. That bass was legal by my state’s criteria, so I took it home for dinner.

I passed a number of anglers while I headed to my truck. The unanimous response was either “nice fish” or “way to go” or something along those lines. But one angler approached me as I was placing the fish in my truck and he said “a good gamefish is too valuable to be caught just once.” That was a comment that the venerable Lee Wulff made in the 1960’s and 1970’s, and it was one that launched the catch-and-release ethic. 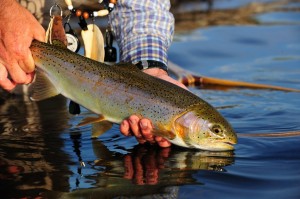 If the angler was trying to make me feel guilty for keeping a fish it didn’t work. In a given year I’ll release over 95% of the fish I catch. Sometimes it’s because they’re short and don’t meet my state’s regulations. Other times it’s a big, heavy female loaded with eggs, and I feel better about releasing her to spawn. And still other times I just don’t feel like keeping a fish. I believe in releasing far more fish than I catch, but when I want to keep one for the table I don’t have a problem with it at all.

One reason I think we have low numbers of fish in certain areas may have to do with our advances on storing our catches. Think about it: prior to the ice box, folks harvested what they could eat. Long term solutions included pickling, smoking, salting, among other methods. Have you ever eaten salt cod? The fresh version is far superior. Nowadays, fish can be frozen for greater length of time. Perhaps, if we all moved to a moderate level of harvesting we’d have enough fish in the waters as well as in our bellies. 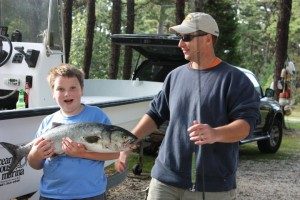 2 Versatile Flies to Use When Fly Fishing for Bass