Los Angeles is many things to many people, but only locals think of Tinseltown as a place to catch fish. The second-largest city in the United States has lakes and reservoirs that are very popular among the fishing crowd, and saltwater action is a step away. While lots of anglers drive an hour south to San Diego you can find enough fresh and saltwater action within a short drive from the center of the city. 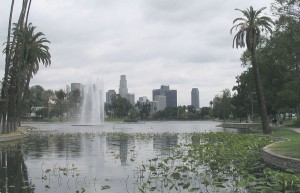 A mile due west from Dodger Stadium is Echo Park Lake which is a great warm water fishery. Here you’ll find catfish, bluegills and largemouth bass for sure, but the state also stocks Echo Park Lake with rainbow trout. Most of those stockings are during the Fall and Winter which is a time of year preferred by the coldwater trout. Going fishing in the morning and catching a Dodger game in the afternoon sounds like a perfect day, but be prepared for some stares if you bring your tackle to the stadium.

Saltwater fans frequently head to one of the fishing piers. The Venice Fishing Pier is a 1300 foot long pier where anglers routinely catch white sea bass, halibut, and barracuda. If you’re looking for more elbow room (literally), try the 2000 foot Santa Monica Pier. Yellowtail, sea bass and mackerel are the most commonly caught species, but halibut are caught there as well. You’ll find lots of pedestrian traffic on the piers, so if you’re looking for room to move you might consider other areas. 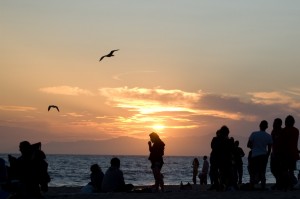 One of those quieter areas is Dockweiler State Park. The open surf holds perch, croakers, and corbina in quantities that make it a popular choice for some of the many annual fishing tournaments. You’ll share the beach with sun bathers, kids building sand castles and swimmers, but the shoreline is three-miles long so there plenty of room for all. The park also offers a concession stand and picnic areas which makes it a good spot to bring your entire family.

Last but not least is Legg Lake located in West Los Angeles. The lake is stocked with rainbow trout from Fall through Spring, and there are natural populations of calico bass (crappie), largemouth bass, bluegills and other panfish. No boats are allowed on the lake and fishing is from the banks.

Finding good fishing access in a major metropolitan city can be difficult, but not in LA. And when you go to one of these hot spots you’ll find what residents have known all along; there’s a lot more to the city than just movie stars! Click here to buy a license or to learn more about fishing in California.

Tips for Finding a Good Spot to Saltwater Fish from Shore