Spring Migration from Maryland to Maine

Our first indication that the striped bass are in the rivers is when the shadbush begins to blossom. Its namesake, the American and Hickory shad enter the rivers at that time as well, and the bluefish aren’t far behind, either. Keep an eye on your buds, but most likely this is going to occur between March 29 and April 17, beginning after the full moon on March 27 know as the Fish Moon.

Warmer water temperatures and longer periods of daylight are what triggers the migration as do some spawning tendencies. Wave after wave of striped bass run the New Jersey beaches and pull in to areas like Barnegat Bay, Manasquan Inlet, and Sandy Hook. Some continue around the South Shore of Long Island, New York and skim the edges of Fire Island and Shinnecock Inlet. Many will wrap around and pour into Long Island Sound and from the Hamptons, Shelter Island, and all the way up the mouth of the Housatonic River you’ll find striped bass. Others fill up the Hudson and East Rivers and Jamaica Bay while others pick-pocket their way through the coves and cobble of the North Shore. 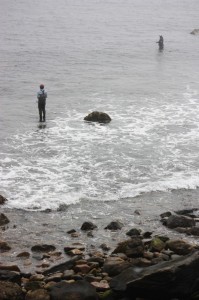 Some striped bass favor a more direct approach, and they take a tack through the ocean. They’ll hit the beaches and move into the rivers and saltponds on Block Island, Nantucket, and Martha’s Vineyard, MA. Everyone’s attention should be on the first stripers of the year, and when you see these migratory fish and their sea lice are landed its cause for celebration that the winter is truly over. 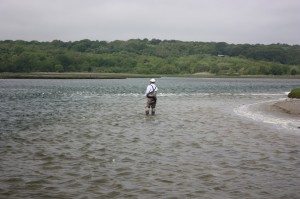 The migration continues for some fish, and they’ll leave the offshore islands for the inshore waters near the mainland. Matunuk in Rhode Island is always among the spots with the earliest arrivals. After a short while the schools spread out all along Rhode Island’s South County and legendary hot spots like Point Judith, Ninigret and Quonochontaug Ponds, and Weakapaug gather lots of anglers. Some stripers push into Narragansett Bay while others spend some time in the Westport River. They’ll fill up Buzzard’s Bay, and many stripers will forge onward through the Cape Cod Canal. Some fish that leave Martha’s Vineyard make an appearance at Waquoit Bay, South Cape Beach, and Popponesset. The Bass River always holds fish as do the flats off of Monomoy Island. There is no shortage of places to fish in between. 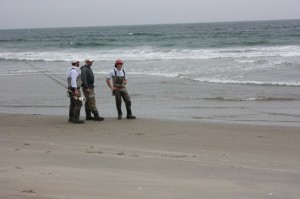 In recent years, a lot of the stripers have gotten hung up feasting on big sandeels offshore. If they don’t, you’ll find bass ranging from New Hampshire’s Pisacataqua River all the way to Maine’s Kennebec River. The season is about to begin. I can hardly wait.

The Epic Hatch Events of Spring