I recently did a straw pole study with a couple dozen of my friends. I asked them to name three states with great trout and bass fishing. Not one mentioned Tennessee, which shocked me, ‘cause in my opinion, it ranks at the top. I called my good friend Byron Begley at Little River Outfitters located in Townsend, TN to share my story.

“You know, there are over 800 miles of fishable trout streams in the Great Smoky Mountains National Park alone,” he said. “And that’s not even accounting for the rest of the state. The park is a tremendous 500,000 acres. There are wonderful mountain streams with great populations of rainbow trout, brook trout, and brown trout. It’s an amazing resource that gets even better in the waters just outside of the park.

“The rivers at the lower elevations offer some excellent smallmouth bass fishing. While the fish may be small, they make up for their size in fight and in numbers. They’re a hoot, particularly on a fly rod.” Smallmouth bass in the 5-and 6-pound range can be caught in the lowland rivers such as Little River, Little Pigeon River and Abrams Creek. 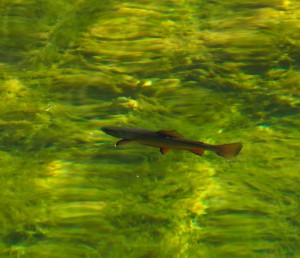 The only native trout is the brookie, and you’ll find them at elevations upwards of 2,000 feet. Probably the most abundant are the rainbows and they’re spread throughout the area. Brown trout are the most sought after species, and in Tennessee you’ll find them in the larger streams with deeper pools and undercut banks.

“The Tennessee River that was part of the Tennessee Valley Authority’s projects in the 1930’s and 1940’s is another phenomenal resource,” Begley said. “In addition to power generation, the dams built created lakes and tailwaters. The tailwaters have created an unbelievably fertile river system. You’ll find trout, large and smallmouth bass, freshwater stripers, and panfish throughout the watershed. And there is a wide-range of water types, too. You’ll find lakes, freestone streams, and lowland rivers, all chock-a-block with fish. Tennessee is a fisherman’s paradise.” 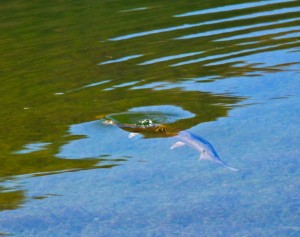 Because of the states’ southern proximity, fishing kicks off in March and gets increasingly better until the summer. At that point, some anglers will focus on ponds and lakes for bass and panfish.

Anglers hike into the backcountry in the higher elevations of the Smokies and Cherokee National Forest and catch trout even during the warmest months of the year. The high elevation brook trout streams fish well during the summer.

Fly fishermen in particular head to the bottom-release tailwaters where they’ll find cooler water temperatures and active fish. There are plenty of campgrounds, hotels and motels, and great restaurants. If you’re unfamiliar with the waters, check out the Take Me Fishing map specific to Tennessee or stop at a local fishing shop and guide to steer you in the right direction.